Lessons for Enlightenment #23 and 24 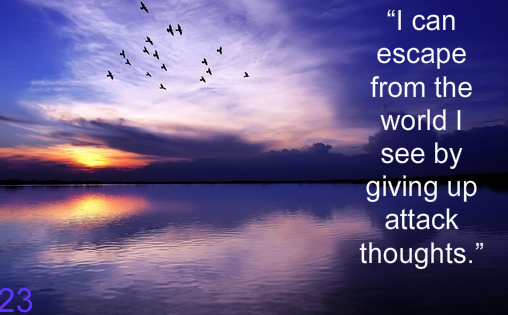 I can escape from the world I see by giving up attack thoughts.

The idea for today contains the only way out of fear that will ever succeed. Nothing else will work; everything else is meaningless. But this way cannot fail. Every thought you have makes up some segment of the world you see. It is with your thoughts, then, that we must work, if your perception of the world is to be changed.

The world you see is a vengeful world, and everything in it is a symbol of vengeance. Each of your perceptions of “external reality” is a pictorial representation of your own attack thoughts. One can well ask if this can be called seeing. Is not fantasy a better word for such a process, and hallucination a more appropriate term for the result?

You see the world that you have made, but you do not see yourself as the image maker. You cannot be saved from the world, but you can escape from its cause. This is what salvation means, for where is the world you see when its cause is gone? Vision already holds a replacement for everything you think you see now. Loveliness can light your images, and so transform them that you will love them, even though they were made of hate. For you will not be making them alone.

The idea for today introduces the thought that you are not trapped in the world you see, because its cause can be changed. This change requires, first, that the cause be identified and then let go, so that it can be replaced. The first two steps in this process require your cooperation. The final one does not. Your images have already been replaced. By taking the first two steps, you will see that this is so.

Besides using it throughout the day as the need arises, five practice periods are required in applying today’s idea. As you look about you, repeat the idea slowly to yourself first, and then close your eyes and devote about a minute to searching your mind for as many attack thoughts as occur to you. As each one crosses your mind say:

I can escape from the world I see by giving up attack thoughts about ______.

Hold each attack thought in mind as you say this, and then dismiss that thought and go on to the next.

In the practice periods, be sure to include both your thoughts of attacking and of being attacked. Their effects are exactly the same because they are exactly the same. You do not recognize this as yet, and you are asked at this time only to treat them as the same in today’s practice periods. We are still at the stage of identifying the cause of the world you see. When you finally learn that thoughts of attack and of being attacked are not different, you will be ready to let the cause go.

I do not perceive my own best interests.

In no situation that arises do you realize the outcome that would make you happy. Therefore, you have no guide to appropriate action, and no way of judging the result. What you do is determined by your perception of the situation, and that perception is wrong. It is inevitable, then, that you will not serve your own best interests. Yet they are your only goal in any situation which is correctly perceived. Otherwise, you will not recognize what they are.

If you realized that you do not perceive your own best interests, you could be taught what they are. But in the presence of your conviction that you do know what they are, you cannot learn. The idea for today is a step toward opening your mind so that learning can begin.

The exercises for today require much more honesty than you are accustomed to using. A few subjects, honestly and carefully considered in each of the five practice periods which should be undertaken today, will be more helpful than a more cursory examination of a large number. Two minutes are suggested for each of the mind-searching periods which the exercises involve.

The practice periods should begin with repeating today’s idea, followed by searching the mind, with closed eyes, for unresolved situations about which you are currently concerned. The emphasis should be on uncovering the outcome you want. You will quickly realize that you have a number of goals in mind as part of the desired outcome, and also that these goals are on different levels and often conflict.

In applying the idea for today, name each situation that occurs to you, and then enumerate carefully as many goals as possible that you would like to be met in its resolution. The form of each application should be roughly as follows:

and so on. Try to cover as many different kinds of outcomes as may honestly occur to you, even if some of them do not appear to be directly related to the situation, or even to be inherent in it at all.

If these exercises are done properly, you will quickly recognize that you are making a large number of demands of the situation which have nothing to do with it. You will also recognize that many of your goals are contradictory, that you have no unified outcome in mind, and that you must experience disappointment in connection with some of your goals, however the situation turns out.

After covering the list of as many hoped-for goals as possible, for each unresolved situation that crosses your mind say to yourself:

I do not perceive my own best interests in this situation,

and go on to the next one.