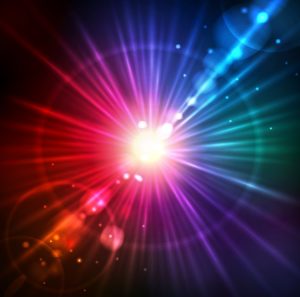 This is the first idea we have had that is related to a major phase of the correction process; the reversal of the thinking of the world. It seems as if the world determines what you perceive. Today’s idea introduces the concept that your thoughts determine the world you see. Be glad indeed to practice the idea in its initial form, for in this idea is your release made sure. The key to forgiveness lies in it.

The practice periods for today’s idea are to be undertaken somewhat differently from the previous ones. Begin with your eyes closed, and repeat the idea slowly to yourself. Then open your eyes and look about, near and far, up and down, —anywhere. During the minute or so to be spent in using the idea merely repeat it to yourself, being sure to do so without haste, and with no sense of urgency or effort.

To do these exercises for maximum benefit, the eyes should move from one thing to another fairly rapidly, since they should not linger on anything in particular. The words, however, should be used in an unhurried, even leisurely fashion. The introduction to this idea, in particular, should be practiced as casually as possible. It contains the foundation for the peace, relaxation and freedom from worry that we are trying to achieve. On concluding the exercises, close your eyes and repeat the idea once more slowly to yourself.

Three practice periods today will probably be sufficient. However, if there is little or no uneasiness and an inclination to do more, as many as five may be undertaken. More than this is not recommended.

Lesson 12
I am upset because I see a meaningless world.

The importance of this idea lies in the fact that it contains a correction for a major perceptual distortion. You think that what upsets you is a frightening world, or a sad world, or a violent world, or an insane world. All these attributes are given it by you. The world is meaningless in itself.

These exercises are done with eyes open. Look around you, this time quite slowly. Try to pace yourself so that the slow shifting of your glance from one thing to another involves a fairly constant time interval. Do not allow the time of the shift to become markedly longer or shorter, but try, instead, to keep a measured, even tempo throughout. What you see does not matter. You teach yourself this as you give whatever your glance rests on equal attention and equal time. This is a beginning step in learning to give them all equal value.

As you look about you, say to yourself:

I think I see a fearful world, a dangerous world, a hostile world,
a sad world, a wicked world, a crazy world,

and so on, using whatever descriptive terms happen to occur to you. If terms which seem positive rather than negative occur to you, include them. For example, you might think of “a good world,” or “a satisfying world.” If such terms occur to you, use them along with the rest. You may not yet understand why these “nice” adjectives belong in these exercises but remember that a “good world” implies a “bad” one, and a “satisfying world” implies an “unsatisfying” one. All terms which cross your mind are suitable subjects for today’s exercises. Their seeming quality does not matter.

Be sure that you do not alter the time intervals between applying today’s idea to what you think is pleasant and what you think is unpleasant. For the purposes of these exercises, there is no difference between them. At the end of the practice period, add:

But I am upset because I see a meaningless world.

What is meaningless is neither good nor bad. Why, then, should a meaningless world upset you? If you could accept the world as meaningless and let the truth be written upon it for you, it would make you indescribably happy. But because it is meaningless, you are impelled to write upon it what you would have it be. It is this you see in it. It is this that is meaningless in truth. Beneath your words is written the Word of God. The truth upsets you now, but when your words have been erased, you will see His. That is the ultimate purpose of these exercises.

Three or four times is enough for practicing the idea for today. Nor should the practice periods exceed a minute. You may find even this too long. Terminate the exercises whenever you experience a sense of strain.