Rainbow Bridge Meditation, Every Tuesday through 7/24/18 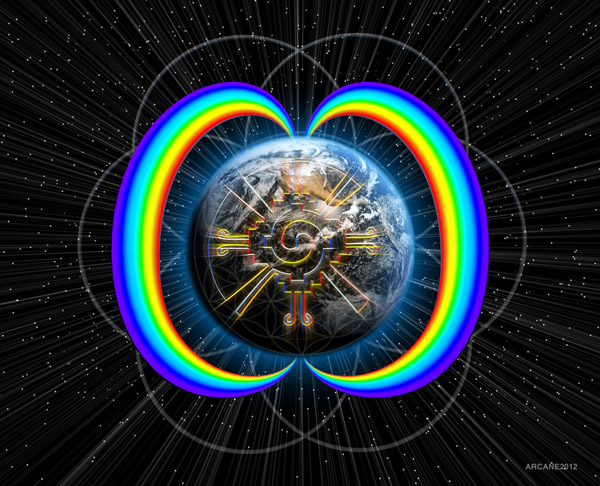 Before the meditation it is good to take a few moments to clear your mind, dissolving all thoughts as they arise. Also focus on feeling love arise in your heart. When you feel your mind clear, then begin the visualization.

Let’s begin with activating each of the 7 main chakras in the body. First, we will take 3 deep breaths together visualizing the red root chakra filling up with each breath and a bright Ruby red color emanating from that space, releasing anything that is not necessary with each outbreath. The root is the space beneath you while seated, like a grounding cord moving down from the center of your spine into the Earth’s core
.
Now let’s take 3 deep breaths together moving the energy up from the root and into the sacral chakra. Here we feel the breath filling up the space between the lower belly and the sacrum. Visualize a bright orange color filling this space with each in breath and releasing any unwanted thoughts, emotions, etc. with each outbreath. Just let it all go.

Next, let’s take 3 deep breaths together moving up from the root and sacrum up into the solar plexus chakra. This is the space in your center above the belly button and below the chest. Here imagine yourself filling up with the golden bright light of the Universe allowing it to fill your center and emanate through the rest of your being. This chakra is often referred to as the seat of the soul. It is your own personal powerhouse of energy. Let anything that is not serving you go now.

Moving up from the Earth through the first 3 chakras, now we breath in the healing green Emerald light into our heart charkas. Feel the bright green light filling up the space in both the front and the back of your heart. Imagine the green healing light healing you with every in breath, filling you up with amazing expansive energy. Release the energy back down into the core of the Earth with the outbreath, now filling the center of the Earth with this expansive love.

Continuing on, we take 3 deep breaths pulling the energy from Earth center up all the first 4 chakras and now into the center of our throats. Breathe in the beautiful Aquamarine colored light, allowing it to fill up your throat and give strength to your own inner voice. Share your voice with the Earth on the outbreath, releasing it back down into the Earth.

Next, still pulling the energy up even more, we take 3 deep breaths together into the 3rd eye chakra, right into the mind’s eye. Breathe in the deep cobalt blue light into the space behind your eyes, in the center of your brain. Feel this deep blue light activating the neurons and connections in the brain, enhancing your own inner awareness. Allow this awareness to be shared with the center of the Earth with each outbreath as we send the energy back down.

Now we take 3 deep breaths together pulling the energy all the way up from the root to the crown chakra, the space at the very top of your head. Feel the deep Amethyst colored energy filling up the space at the top of your head and beyond. As the energy moves beyond and above you, it turns into a crystalline white light. Feel this bright crystalline white light fill up your spine, your entire center column. Now as we breathe out, we can feel this energy push out the top of our heads, breathing out and up, allowing this energy to circle back down into the core of the Earth and back up our center column again.

Watch this white light spin into a column of rainbow colored light in your center column. Feel the rainbows pushing out and around each side of your body. We have created the rainbow bridge. We can imagine the center of the Earth in our hearts and the rainbows surrounding it. Now let’s take 3 deep breaths, feeling this activation in the center column, reversing this flow, breathing in the energy from space up above and sharing this energy back down into the center of the Earth on our outbreath, taking the rainbow bridge the opposite direction with the flow of our breath. You can also imagine this action like a Taurus or toroidal field. The flow is always moving in equal and opposite directions simultaneously.

Let’s visualize ourselves inside the Earth’s octahedron crystal core in the center of the Earth. Feel your heart at the center of this crystal core generating an intensely blazing point of white light.
We can now see this light from our heart core creating an etheric column that extends to the North and South poles from the blazing center to the tips of the octahedron.
Now visualize a great stream of multicolored plasma-filled light emanating from your heart core and flowing along the central axis toward both of Earth’s poles, shooting out from them, to become two rainbow bands 180 degrees apart.

Same as the 7-day meditation, but after visualizing the octahedron in the center of the Earth, we amplify the visualization to include a more complete description of the center of the octahedron, which is as follows:
Visualize a red and blue flux tube, like two strands of DNA coiled around the etheric column. Now visualize each of the four time atoms in the crystal core.
A red time atom is strung on the northern axis, a blue time atom is on the southern axis.
Now feel the gravitational plane of the octahedron that emanates horizontally from the luminous center point. Along this plane are two more time atoms, a white time atom to the right and a yellow time atom to the left that turn like paddle wheelers making a counterclockwise motion around the center.
Then complete the meditation as in the seven-day practice.

It is recommended to do the 28-day practice in a larger group, seated if possible in a circle with a globe in the center perhaps surrounded by four (or more) candles. The idea of meditating the whole Earth, feeling how it is a total simultaneity of experience is very important for the cultivation of noospheric consciousness.

For more information, go to lawoftime.org 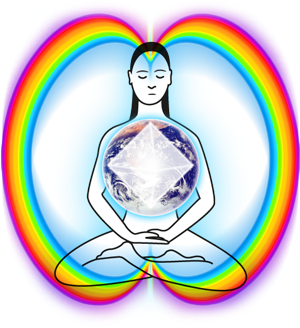 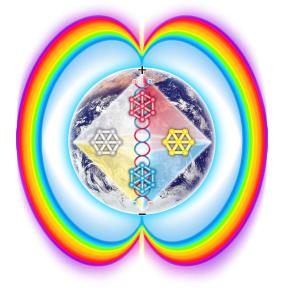